MACHINERY AND EQUIPMENT
Drill :
C8
Tij
Auger
Punch
Hammer
Casing Pipe
Injection Machine :
Pump
Mixer
Agitator
Shotcrete Machine :
Aliva
Aliva hose set
Compressor
Auxiliary machinery :
Water Pump
Generator
PRODUCTION METHODS :
Production begins with marking of the project locations b the site measurement group and material selected according to the soil structure.
Drilling Methods :
In Anchorage methods employing hammer drill, rotary drills or both are used.
Rotary Drill Method:
It operates by transmitting the pressure and torque through rods to the rock drill at the end of the rod. Commonly used equipment are:
Rock Bit : It consists of a body and a conic bearing. Bearings have hardened tips. The amount of these tips vary with the ground hardness.
Auger : It is used in drilling and discharging drilled material in softer soils such as plastic clay.
Advancing with Casing Pipe : It is used in grounds with filling material or under underground water to prevent collapse during drilling. Tip of the pipe is covered with pipe shoe made of hard metal to prevent abrasion.
Hammer Drill Method :
This method is used in hard rocks. It has two application methods. It creates hammering either at the top of the machine (Top Hammer) or at the bottom of the hole (Down the Hole).
Top Hammer : Rotation created by the machine is transmitted to the ground with the hammer at the top and rods. Bore diameter varies between 35 and 133 mm.
DtH : In this method, the rotation movement from the machine is transmitted to the hammer down the hole. Hammer operates with the air from a compressor while rotating and an embossed bit at the tip hammers the rock. Bore diameter varies between 85 and 254 mm. 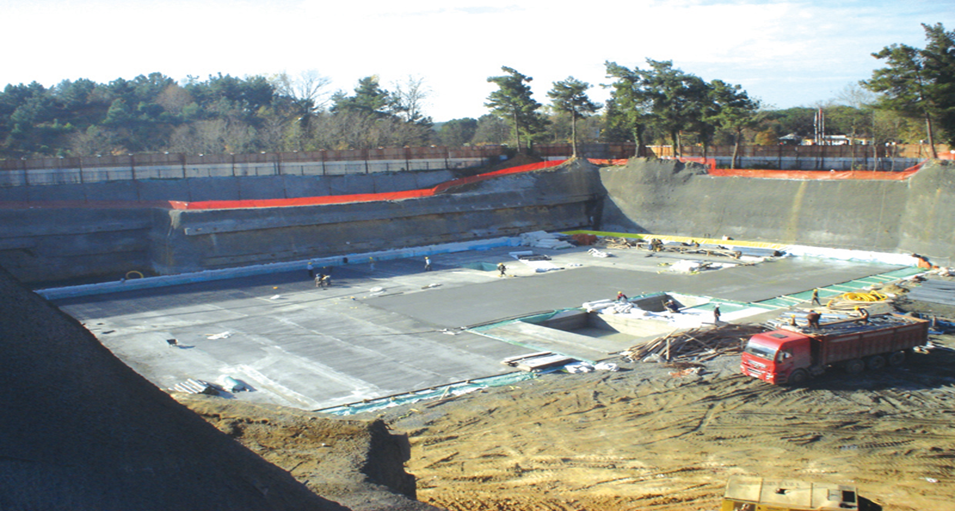 Cleaning Job :
The methods used in discharge of material during the drilling impacts both drilling speed and the quality of the hole. Because, cut material accumulating at the bottom of the hole shall be continuously discharged and hole shall be kept clean to efficiently progress the hole. Air, water or foam is used for this purpose. Insufficient cleaning during drilling causes the bit to get stuck, rods to break at the joints and the equipment to be left inside the hole.

Injection Method :
Splice strength between the injection mortar and steel bar depends on the mixture rate of the injection material, preparation method and method for casting into the hole. After the drilling is completed, the well is filled from bottom to top by the use of guiding hose. Reinforcement o quality specified in the project is placed inside the hole. A second injection is made with guiding hose approximately 1 hour later. Water to cement ratio shall be 0.4 – 0.45. Mixing water shall be of concrete water quality.

Shotcrete Production Method :
After the completion of the drilling and injection works for panel surfaces opened at slopes as specified by the project are complete, panels are cleaned for the finishing and completed by providing concrete cover distances for welded wire fabric at qualities ( compliant overlapping lengths or additional reinforcements) specified in the project. [In cases where residue on the panel surfaces opened (based on the soil type) approximately 5 cm shotcrete is applied to contact of air with the soil surface]. Shotcrete production at the thickness specified in the project is done either by mixing on site, based on the location of the site or by supplying dry mixture from ready concrete plant and mixing with suitable gunite dust mixture and mixing with water at the end of the hose using compressor (in accordance with the properties of the soil). After the completion of bolt plate welds or tension, plates are covered at thicknesses specified in the project.